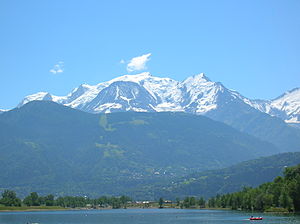 The west face of Mont Blanc, the tallest mountain in the French Alps, from Passy, Haute-Savoie. (Photo credit: Wikipedia)

In my novel, Relocated, my main character speaks fluent Aleyni, but discovers there are a some things he didn’t learn, like expletives.

Face it, they don’t usually teach you how to swear in French class. Nor do they tell you that the euphemism for bathroom is petit coin, or that sortir means to sleep with someone.

They also don’t tell you about regional differences in pronunciation, or about the many differences between Canadian, Belgian, and French.

Which brings me to the following story. My sister, a friend, and I spent a summer in Europe when we were in college. Our friend was semi-engaged to a young man, a Frenchman with a Swiss father. They owned a dental supply business.

So, one day, when L’s boyfriend had a delivery to make, we all piled in Y’s truck and headed for the hills.  We reached the village with no difficulty, but Y. couldn’t find the dentist’s office, so we stopped a passer-by if he knew where Moblanc (dentist’s name) was.

Apologies for my lack of accent marks on this keyboard, and my free translation of Y’s words:

Y: “Est-ce que vous savez, ou est Moblanc?”  (Can you tell me where Moblanc is?)

So we made the delivery and then stopped for a pizza. Pizza is very popular in France, and was even then. French pizza, however, does not by default come with cheese.

Another one of those little cultural differences just waiting to trip up the unwary tourist.